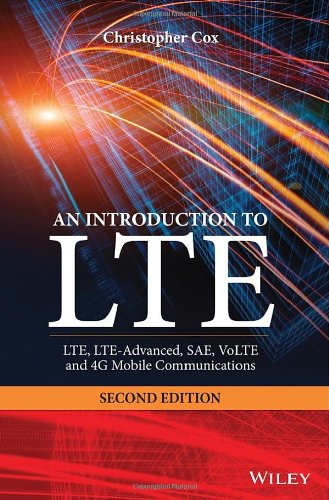 An Introduction to LTE, 2nd Edition

Following on from the successful first edition (March 2012), this book gives a clear explanation of what LTE does and how it works. The content is expressed at a systems level, offering readers the opportunity to grasp the key factors that make LTE the hot topic amongst vendors and operators across the globe. The book assumes no more than a basic knowledge of mobile telecommunication systems, and the reader is not expected to have any previous knowledge of the complex mathematical operations that underpin LTE.

This second edition introduces new material for the current state of the industry, such as the new features of LTE in Releases 11 and 12, notably coordinated multipoint transmission and proximity services; the main short- and long-term solutions for LTE voice calls, namely circuit switched fallback and the IP multimedia subsystem; and the evolution and current state of the LTE market. It also extends some of the material from the first edition, such as inter-operation with other technologies such as GSM, UMTS, wireless local area networks and cdma2000; additional features of LTE Advanced, notably heterogeneous networks and traffic offloading; data transport in the evolved packet core; coverage and capacity estimation for LTE; and a more rigorous treatment of modulation, demodulation and OFDMA. The author breaks down the system into logical blocks, by initially introducing the architecture of LTE, explaining the
techniques used for radio transmission and reception and the overall operation of the system, and concluding with more specialized topics such as LTE voice calls and the later releases of the specifications. This methodical approach enables readers to move on to tackle the specifications and the more advanced texts with confidence.

Variational Methods for Machine Learning with Applications to Deep Networks