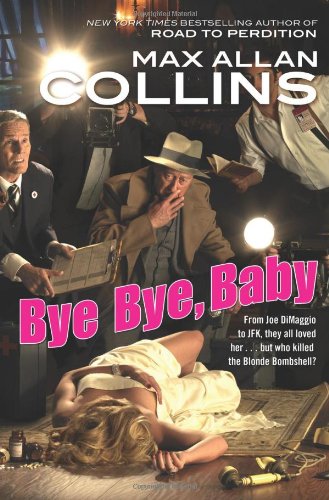 It’s 1962, and Twentieth Century Fox is threatening to fire Marilyn Monroe. The blond goddess hires Nate Heller, private eye to the stars, to tap her phone so she will have a record of their calls in case they take her to court. When Heller starts listening, he uncovers far more than nasty conversations. The CIA, the FBI, the Mafia—even the Russians—are involved in actions focused on Marilyn. She’s the quintessential American cultural icon, idolized by women, desired by men, but her private life is… complicated…and her connection to the Kennedys makes her an object of interest to some parties with sinister intentions.

Not long after Heller signs on, Marilyn winds up dead of a convenient overdose. The detective feels he owes her, and the Kennedys, with whom he busted up corrupt unions in the 1950s. But now, as Heller investigates all possible people—famous, infamous, or deeply cloaked—who might be responsible for Marilyn’s death, he realizes that what has become his most challenging assignment may also be the end of him.

PI Nathan Heller returns in his first new novel in a decade, as Max Allan Collins brings to life a vivid star-studded cast, from JFK and RFK to Frank Sinatra and Peter Lawford, from Jimmy Hoffa and Joe DiMaggio to Hugh Hefner and Sam Giancana. Bye Bye, Baby is a Hollywood tale you never thought could happen…but probably did.