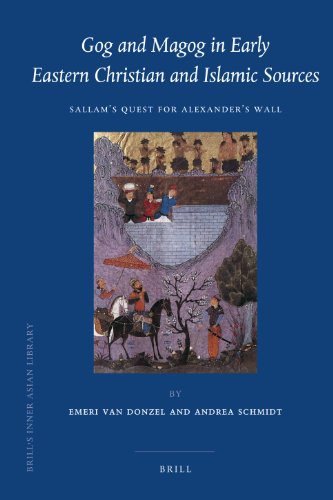 Gog and Magog in Early Eastern Christian and Islamic Sources

Alexander’s alleged Wall against Gog and Magog, often connected with the enclosure of the apocalyptic people, was a widespread theme among Syriac Christians in Mesopotamia. In the ninth century Sallam the Interpreter dictated an account of his search for the barrier to the Arab geographer Ibn Khurradadhbih. The reliability of Sallam’s journey from Samarra to Western China and back (842-45), however, has always been a highly contested issue. Van Donzel and Schmidt consider the travel account as historical.

This volume presents a translation of the source while at the same time it carefully looks into other Eastern Christian and Muslim traditions of the famous lore. A comprehensive survey reconstructs the political and topographical data. As so many other examples, also this story pays witness to the influence of the Syriac Christian tradition on Koran and Muslim Traditions.