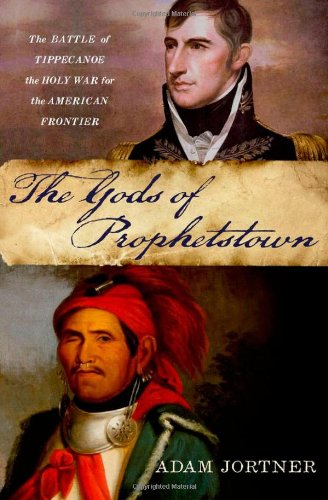 The Gods of Prophetstown: The Battle of Tippecanoe and the Holy War for the American Frontier

It began with an eclipse. In 1806, the Shawnee leader Tenskwatawa (“The Open Door”) declared himself to be in direct contact with the Master of Life, and therefore, the supreme religious authority for all Native Americans. Those who disbelieved him, he warned, “would see darkness come over the sun.” William Henry Harrison, governor of the Indiana Territory and future American president, scoffed at Tenskwatawa. If he was truly a prophet, Harrison taunted, let him perform a miracle. And Tenskwatawa did just that, making the sun go dark at midday.

In The Gods of Prophetstown, Adam Jortner provides a gripping account of the conflict between Tenskwatawa and Harrison, who finally collided in 1811 at a place called Tippecanoe. Though largely forgotten today, their rivalry determined the future of westward expansion and shaped the War of 1812. Jortner weaves together dual biographies of the opposing leaders. In the five years between the eclipse and the battle, Tenskwatawa used his spiritual leadership to forge a political pseudo-state with his brother Tecumseh. Harrison, meanwhile, built a power base in Indiana, rigging elections and maneuvering for higher position. Rejecting received wisdom, Jortner sees nothing as preordained-Native Americans were not inexorably falling toward dispossession and destruction. Deeply rooting his account in a generation of scholarship that has revolutionized Indian history, Jortner places the religious dimension of the struggle at the fore, recreating the spiritual landscapes trod by each side. The climactic battle, he writes, was as much a clash of gods as of men.

Written with profound insight and narrative verve, The Gods of Prophetstownrecaptures a forgotten turning point in American history in time for the 200th anniversary of the Battle of Tippecanoe.

A:Just like today, a lot of Americans in the early 19th century thought God had a plan for the United States; they saw how the U.S. won the Revolution against all odds, and they understood it as the will of God–as providence. And at that time, there were a number of politicians who said we have a providential destiny to bring our citizens more liberty–to spread our civilization across the continent. That’s what led to a war against Canada and the Native Americans, the War of 1812, which almost destroyed the country.

Q:This was a war against one religion in particular, wasn’t it?

A:There was a holy man of the Shawnee nation who took the name Tenskwatawa, which roughly means “The Open Door.” After 1804, he carries a message to the Native Americans across the frontier, but especially in the Ohio Valley. And his message is that the Master of Life, the great being who had created the world and made all the peoples of the Americas, had returned to guide his people on a new path towards independence and self-sufficiency. American officials worried about this religion because Tenskwatawa provided an alternative leadership for Native Americans; he refused to sell land and he refused to accept the perfidy of the Americans.

Q:Most of us only know William Henry Harrison as the guy who died after only being president for thirty days. Tell us more about him.

A:This all takes place thirty years before Harrison becomes President; in 1800, he was the governor of Indiana Territory, which he turned into his personal fiefdom. It’s probably the least democratic place in the U.S. He appointed his own Senate, he exploited loopholes to make sure that his friends got elected, and he basically disenfranchised voters he thought were not going to vote for his handpicked candidates. And on top of that, he expands slavery in Indiana. And he’s constantly reminding people that his way of doing things is the providential way; it’s what freedom is and it’s what God wants.

Q:What happened at the Battle of Tippecanoe?

A:A lot of pain for not much gain. Harrison’s forces get trapped in an early morning skirmish outside the Prophet’s city. There was a prolonged firefight, and Harrison’s troops took the heavier losses, but eventually the Prophet’s soldiers withdrew and abandoned their city. Harrison burns the city to the ground–but he immediately retreats, because he didn’t bring enough troops or materiel to secure the victory. And Tenskwatawa reoccupies the position and rebuilds the town.

Q:Did the Battle of Tippecanoe cause the War of 1812?

A:In part. Harrison was immediately censured by political enemies in Indiana and in Washington, D.C. for starting an unnecessary war. He’s even investigated by Congress–but he saves himself by joining this push for a broader war against all the Northwest Indians and Canada.

Q:Most Americans know almost nothing about the War of 1812? Why is that? What should we remember about it?

A: I think we don’t remember it because we lost. But in some ways, it’s more important to remember because this was a war that politicians claimed was divine and would be easy to win. That’s a cautionary tale. And I think it’s important to remember as an example of the ways in which religious zealotry and political power can interact, on both sides of this conflict, and that’s another cautionary tale.