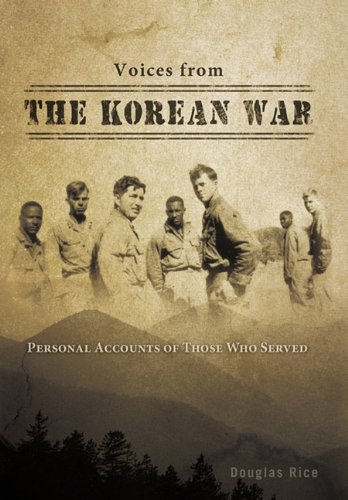 Voices from the Korean War: Personal Accounts of Those Who Served

The Korean War is often dubbed the “Forgotten War,” although more than 36,000 soldiers died in this three-year conflict. In Voices from the Korean War, author Douglas Rice makes certain the men who served are not forgotten as he shares first-person accounts from seventy-nine soldiers who fought in the war from June of 1950 through July of 1953.

Voices from the Korean War follows the soldiers as they trek and fly over the mountainous terrain of the Korean peninsula. Through these eyewitness accounts, hear a soldier describe what happened to a small group of North Korean villagers who refused to divulge their location. Listen in as a wounded soldier tells a flight nurse the story of how he was rescued by American soldiers as he lay wounded in a North Korean home. Learn how some prisoners of war walked their imaginary dogs to irritate their captors.

This compilation of different soldiers’ perspectives conveys what it must have been like to be directly involved in the conflict. It serves as a reminder of the challenges and the sacrifices the soldiers made in the name of war.

Blockchain Democracy: Technology, Law and the Rule of the Crowd