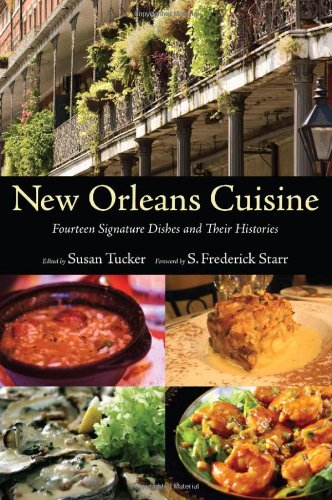 New Orleans Cuisine: Fourteen Signature Dishes and Their Historiesprovides essays on the unparalleled recognition New Orleans has achieved as the Mecca of mealtime. Devoting each chapter to a signature cocktail, appetizer, sandwich, main course, staple, or dessert, contributors from the New Orleans Culinary Collective plate up the essence of the Big Easy through its best-known export: great cooking. This book views the city’s cuisine as a whole, forgetting none of its flavorful ethnic influences–French, African American, German, Italian, Spanish, and more.

In servings of such well-recognized foods as shrimp remoulade, Creole tomato salad, turtle soup, and bread pudding, contributors explore a broad range of issues. Essays consider the history of refrigeration and ice in the city, famous restaurants, cooking schools, and the differences between Cajun and Creole cuisines. Biographical sketches of New Orleans’s luminaries–including Mary Land, Corinne Dunbar, and Lena Richard–give personality to the stories. Recipes for each dish or beverage, drawn from historical cookbooks and contemporary chefs, complete the package.

New Orleans Cuisine shows how ingredients, ethnicities, cooks, chefs, and consumers all converged over time to make the city a culinary capital.